Aston Martin's Volante leaves you grinning from ear to ear
By Jackson Lynch for The Daily, Sunday, September 23, 2012 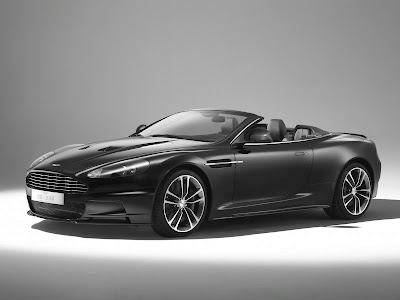 Like millions of car enthusiasts I got my first glimpse of the Aston Martin DBS back in November 2006 while sitting in a darkened theatre watching Daniel Craig as the new 007 in "Casino Royale". Aston's 007 heritage is sterling - the DB5 was the original Bond "car" - and when Craig's 007 lit off in the DBS on a rain-soaked Montenegrin road to save colleague and lover Vesper Lynd my heart rate spiked at the distinctive V12 roar that came pumping out of Britain's premier luxury sports car.

It didn't take long for the word to spread and the orders to come piling in at Aston for the DBS. So imagine my giddy joy nearly six years later as I donned my Anthony Sinclair bespoke suit, crafted by the same Savile Row tailoring house that outfitted Sean Connery in the first Bond films, knowing that I'd be driving the convertible version, the DBS Volante for The Daily later that September morning.

Buckled up and settled into the luxurious black leather, aluminium and carbon fiber cockpit, a push of the electronic key into the center console and the DBS immediately kicked over with its signature guttural note that positively announced its presence. Warm rays of Southern California sune were just peeking through the marine layer so down went the top and off I sped toward the Pacific Coast Highway and a serpentine circuit through the twisting canyon roads of the Santa Monica Mountains that I'd mapped out for my pleasure.

Rolling along surface streets and the freeway the Aston was deceivingly plush in the standard press-the-D-button-on-the-console-and-drive mode. And when it came time to make a hard right up a canyon and take the twisties I pushed the "race" suspension button, grabbed a downshift on the F1-like steering wheel mounted paddle shifter and in seconds the Volante was gobbling up pavement at an increasingly thrilling rate of speed. Deftly diving in and out of rights and lefts, cambered and off-cambered turns and quick changes in elevation and road conditions challenged my taste for the edge more than this super car's abilities. The seemingly perfect combination of power, balance, suspension and steady fade-free stopping provided by the carbon ceramic brakes created a confidence-induced euphoria as I railed through turns like a slot car at speeds most passengers were surely to white nuckle.

If this car's 510 horsepower 6-liter V12 doesn't light you up, then the stereo most certainly will. Bang & Olufsen created a 1,000-watt audio system with nifty pop-up dash-mounted tweeters that's clear and punchy and utilizes fantastic adaptive controls that sense the road, speed and whether the top is up or down to tailor the volume and response to the conditions.

A couple hundred turns with that stereo blasting and at least that many grinning ear-to-ear thrills later I begrudgingly made a left back onto the now-traffic-choked Pacific Coast Highway, casually switched from racy to round-town mode again and basked in the sun while enjoying many a thumbs-up from oncoming cognoscenti. A couple hours later I handed over the Aston's key, drove my own racy little car (which by then seemed like a road weary '62 VW Bug) and adjourned to the bar for the requisite vodka martini with a couple mates who were jealous they hadn't been invited along that day, yet massively eager to hear my tale about how I had the chance to be Bond for a day in one of the world's most acclaimed luxury super cars.

A special thank you to Jackson Lynch for his kind permission to publish the above article on this blog.
Posted by Anthony Sinclair Ltd at 06:20